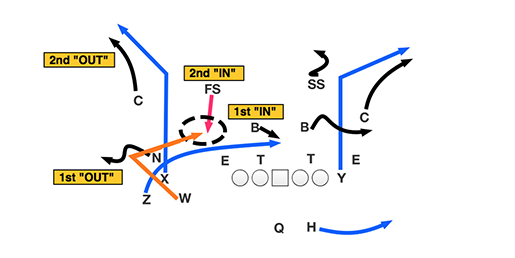 Between 1976 and 2018 there have been eleven head coaches for the Buccaneers franchise. Within this time period the team has played 676 games in 43 seasons since joining the NFL. Three Buccaneers coaches, John McKay, Tony Dungy, and Jon Gruden, have taken the Buccaneers to the playoffs, while only Gruden has won the Super Bowl with the team, at Super Bowl XXXVII. The team's all-time leader in games coached is McKay (133) and the leader in wins is Gruden (57) plus 3 postseason victories; Dungy leads all Buccaneers coaches in winning percentage (.563). Leeman Bennett has the lowest winning percentage (.125) of all Buccaneers coaches. The eighth coach, Raheem Morris, was fired on January 2, 2012. On January 26, 2012 Rutgers head coach Greg Schiano was hired as the new Tampa Bay Buccaneers coach. Schiano posted a record of 11–21 during two seasons in charge, before he was fired on December 30, 2013.

Coach John McKay was the first head coach of the Buccaneers, holding the reins for nine seasons. He had previously won four national championships with the University of Southern California but was hand-picked by Hugh Culverhouse to take over the expansion franchise Bucs in 1976:
»READ MORE ABOUT COACH MCKAY HERE»

Tampa Bay Buccaneers hired him on January 23, 1985, to replace the retiring John McKay. However, Bennett's previous success did not come with him to Tampa, with consecutive 2-14 finishes in both of his years as coach of the Bucs. On December 29, 1986, he was dismissed by team owner Hugh Culverhouse:
»READ MORE ABOUT COACH BENNETT HERE»

Ray Perkins was introduced on December 31, 1986 as "my Vince Lombardi " by Hugh Culverhouse. Obviously the Bucs' then-owner knew another person with the same name as the former Packer coaching legend. Perkins was a total disciplinarian and immediately alienated many of his players with three-a-day practice sessions during his first training camp, and ruthless impersonal style in dealing with them:
»READ MORE ABOUT COACH PERKINS HERE»

Williamson returned to coaching in 1983, when he was hired as an assistant for the Kansas City Chiefs under new coach John Mackovic. After Mackovic was fired following the 1986 season, Williamson was told by the new head coach that he would not be retained. He moved to the Tampa Bay Buccaneers, working under fellow former Alabama coach Ray Perkins as offensive coordinator. When Perkins was fired late in the 1990 season, Williamson was named interim head coach:
»READ MORE ABOUT COACH WILLIAMSON HERE»

Wyche was hired by the Tampa Bay Buccaneers as head coach in 1992. He spent the next four years as head coach of the Tampa Bay Buccaneers, where he drafted Derrick Brooks, Warren Sapp, and John Lynch, players who would be key members of the successful Bucs teams under his successors, Tony Dungy and Jon Gruden. Wyche was dismissed at the conclusion of the 1995 season.:
»READ MORE ABOUT COACH WYCHE HERE»

Dungy achieved his dream of being an NFL head coach when he was hired by Rich McKay to reform the Tampa Bay Buccaneers, a team then well known for its lack of success, on January 22, 1996. Dungy installed his version of the Cover 2 defense with defensive coordinator Monte Kiffin with a few new wrinkles. The result was the now-famous Tampa 2, though Dungy openly admitted it was based on concepts he had picked up from his days in Pittsburgh:
»READ MORE ABOUT COACH Dungy HERE»

Immediately after arriving in Tampa, Gruden significantly retooled the offense with the addition of numerous free agents. His determination to fix the under-performing offense, so often maligned during Dungy's tenure, inspired Tampa's defense to another #1 ranking, which helped the team to a 12–4 season. Both the offense and defense hit their stride in the playoffs; the Buccaneers posted a playoff per-game point differential of 23 points per game in victory. The Buccaneers Super Bowl vistory:
»READ MORE ABOUT COACH GRUDEN HERE»

Morris earned his first victory as a head coach in week 9 against the Green Bay Packers. He finished his first year as the head coach, leading the team to last in the NFC South with a 3–13 record. In his second season, the team finished 10-6, barely missing the playoffs. That seven game turnaround was the best in franchise history.:
»READ MORE ABOUT COACH MORRIS HERE»

The Bucs' ninth head coach was Schiano, which was his first head coaching opportunity at the professional football level. The hire was generally considered surprising (as "college" coaches, historically, tend to experience a high rate of failure at the NFL/professional level):
»READ MORE ABOUT COACH SCHIANO HERE»

Smith was formally introduced as the 10th head coach in franchise history on Monday, January 7, 2014. Talking about his first stint with the Bucs, Smith said: "We did lay a foundation for Tampa Bay Buccaneer football, there's a certain brand of football that you expected from us. That would be relentless, you play hard, physical, but there was a brand of football that you did get from us each week at Raymond James Stadium.:
»READ MORE ABOUT COACH SMITH HERE»

Dirk Koetter was announced as the 11th head coach of the Tampa Bay Buccaneers on January 15, 2016 having been promoted from his role of Offensive Co-Ordinator where he had led the 2015 Bucs to the best offensive season in franchise history. Coach Koetter's three-years of steering the Pewter Pitate ship hit shallow waters and ended after the season-ending loss to the Falcons in Raymond James stadium. After another 5-11 season, the Buccaneers fired Koetter the same day, December 30th, 2018:
»READ MORE ABOUT COACH KOETTER HERE»

Bruce Charles Arians was announced as the 12th head coach of the Tampa Bay Buccaneers on January 8, 2019, Arians agreed to terms on a 4-year contract to come out of retirement and became the head coach of the Buccaneers. Having never played in the NFL Arians was previously with the Arizona Cardinals for five years where he was awarded NFL Coach of the year followed with another award in 2012 as interim coach of the Indianapolis Colts in 2012. After spending eight seasons as assistant head coach of the Pittsburgh Steelers (winning 5-Super Bowl rings).

Arians assembled the largest coaching staff in the NFL for the BUCS 2019 NFL season, at a total of 28 assistants. Arians made it known one of his intentions was fixing the defensive secondary. In his first season with the team, the Buccaneers finished with a 7-9 record.:
»READ MORE ABOUT COACH ARIANS HERE»

View All Tampa Bay Buccaneers Coaching Staff By Each Year