Defensive Back, Running Back

Buccaneers Career..... Did Not Play For BUCS - Super Bowl with KC Chiefs

Solomon Embra Brannan (born September 5, 1942) is a former American football defensive back who played three seasons in the American Football League (AFL) with the Kansas City Chiefs and New York Jets. He played college football at Morris Brown College and attended Tompkins High School in Savannah, Georgia. Brannan has also been a member of the Jacksonville Sharks of the World Football League. He was a member of the Kansas City Chiefs team that won the 1966 AFL championship.

As Fanatical football fans were honored to feature an individual who played in the first Super Bowl on Jan. 15, 1967 onto our Advisory Team. Below we are sharing a story that was featured in 2001 about Sol Brannan who was about to receive a proclamation from the governor’s office for his participation in Super Bowl I.

Currently Brannan resides in Atlanta, GA where he and some other former NFL players began going to Third World countries and introducing youth to American football. Brannan was the first coach of a team playing organized American football on the East African continent. 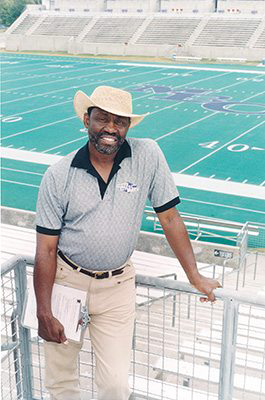 ATLANTA—It’s day four of the first week of football practice inside Herndon Stadium at Morris Brown College. Coach Solomon Brannan Jr. has taken a place on the bleachers between the 40- and 50-yard lines observing the team. Watching with a keen eye, he has a spectator’s view, but an ex-player’s mentality and a coach’s intellect. The players are doing calisthenics as they yell, “M-B-C-1, M-B-C-2, M-B-C-3 . . .”

The 6-foot 1-inch Brannan is wearing a straw hat to shield the Georgia sun. He’s been coaching for over 23 years at the collegiate level, 18 with his alma mater Morris Brown. The 2001 season will be different from all his past sideline gigs because Brannan is now the head coach. Moreover, he is the first Catholic head coach of Morris Brown College, the historically black institution in the Atlanta University Center, founded 120 years ago by the African Methodist Episcopal (A.M.E.) Church.

For Brannan, the fifth child in a family of 12 children (three brothers and eight sisters), it all started back in Savannah. Brannan’s first attempt at football began at the Little League level.

But at Tompkins High School he played third base in baseball, ran track and field, and was captain of the basketball team. An older brother tried out for the football team and when he quit, the coach said the Brannans were scared.

“I only went out for the team to prove the coach wrong,” he recalled.

Brannan played linebacker and fullback, but he was switched to cornerback and tailback. Recruited out of high school for football by colleges and baseball by pro scouts, Brannan took the college football route because attending college and earning an education outweighed any other sports prospects.

Upon graduation from high school, Brannan decided to attend Morris Brown College, a school deeply rooted in the A.M.E. Church. In fact, Brannan grew up in an A.M.E. household, but had attended St. Anthony of Padua Catholic School, Savannah, through the fifth grade.

One Sunday he attended Mass with some friends. After the service, however, he realized he was attracted to Catholicism and he started to study the faith. Brannan’s high school football coach, Joseph Turner, was also Catholic and eventually he made the conversion to Catholicism.

When Brannan arrived at Morris Brown in 1960 he wanted to play wide receiver, “but they played me at tailback and cornerback. Nevertheless, I scored a touchdown in the first game against Tennessee State.”

In the third game of the season the Morris Brown Wolverines were trailing Kentucky State with 19 seconds left in the game. Brannan ran back a kickoff return for 97 yards to seal a victory for the team. From that point on his “star potential” drew the attention of the fans and the coaches. In addition to first string tailback and cornerback, he went on to run back punts and kickoffs and served as the kicker and the backup punter.

“At times I was on the field nearly every down,” Brannan said.

He continued to play baseball throughout college, attaining a .455 batting average in his senior year. The Baltimore Orioles and the Minnesota Twins of the American League pursued Brannan. “I felt like I was a better baseball player, but I was afraid of going to the minors and never making it to the major league.”

The Kansas City Chiefs of the old American Football League had a different opinion of his football skills and they signed him to a contract in 1964. There Brannan had the opportunity to play for legendary coach Hank Stram. Stram was also Catholic and always had a priest on the sideline during games.

“Coach Stram was one of the most intriguing people I ever met,” Brannan said. “To him we were more than football players, but men who were blessed with the opportunity to play football. Coach Stram said that after the game of football was over that you would still be a man; therefore, you had an obligation to be a person of character on and off the field.”

Coach Stram was also the impetus behind integrating the Chiefs. Brannan said he would joke with Stram saying, “They’re going to fire you for bringing all of us (the black players) to the team. He would always reply, ‘They’re not going to fire me for the people I put on the team. They’re going to fire me if I don’t win!’ In Stram’s words he was not in the color business, but the people business. He attempted to put the best team on the field whatever color you were.”

Today Stram lives outside New Orleans, a parishioner of Our Lady of the Lake Church. Stram said of Brannan, “Solomon was one of my favorite players because he was dedicated and he had a passion for the game. He was a great student of the game and a team player who always gave his best. His attitude will pay great dividends in his new position as a head coach.” 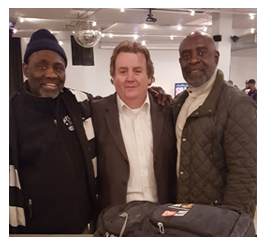 At Kansas City Brannan still yearned to play wide receiver and he got his chance with the Chiefs. In his first game against the team’s archrival, the Oakland Raiders, he scored two touchdowns from that position. In time he moved up to first string, but he incurred a concussion from a hit he took one day during practice.

“I thought my career was in limbo,” recalled Brannan.

Following a period of recovery and rehabilitation, he played defensive back and wide receiver for a semi-pro team called the Springfield (Mass.) Acorns of the Continental Football League. The team was 0-4 when he arrived, but they ended the season 13-5 and made the playoffs.

Upon returning to the Kansas City Chiefs in 1965, Brannan played exclusively at the defensive back position because the team’s four or five top draft picks were wide receivers that year. Brannan scored in five straight exhibition games on defense.

“I played with Hall of Famers like Buck Buchanan, defensive tackle, Bobby Bell, linebacker, and Lynn Dawson, quarterback. The team went to the playoffs every year I was on the team,” said Brannan.

Then came the moment when he and the team played in the first Super Bowl on Jan. 15, 1967 against the Green Bay Packers of the National Football League. The game was so different then and so commercial now. “We didn’t look at the money part,” Brannan recalled. “The first Super Bowl was purely a game to us because we were the first team to represent our league.”

“Tickets for the game were priced between $8 and $12. We would have played for nothing,” Brannan said. “Today you couldn’t get a team to take the field without a guarantee for money. For us it was the commitment and respect for the game.”

The Chiefs lost Super Bowl I to the Packers 35-10, but it’s a day in Brannan’s career he’ll never forget.

Two years later a trade sent him to the Cincinnati Bengals. Although he was only with the Bengals for half the 1969-70 season, an unforgettable moment occurred during a preseason game at Nippert Stadium, the team’s original home field. A teammate stripped the football from a Kansas City Chief s’ tight end and Brannan picked up the loose ball, running 85 yards to record the first touchdown in the Bengals’ franchise history.

Brannan’s professional career ended in 1972 with the Detroit Lions. He didn’t stray too far from sports after his playing days. Three years before he retired, he opened a sporting goods store and 32 years later it is now under the management of his two youngest children in southwest Atlanta. Brannan and his wife of 39 years, Jean, have three children, Kevin, Kim and Kenny, and one grandson, Brandon.

Brannan is a parishioner of St. Anthony Church, Atlanta, where he is a member of the Men’s Action Club and the Knights of St. Peter Claver. He and his wife were also invested as Knight and Lady of the Equestrian Order of the Holy Sepulchre of Jerusalem in 1998. Outside of church Brannan is a member of the NFL Players Association, Atlanta Chapter, and he helps with the Annual Sickle Cell Road Race/Walk sponsored by the Sickle Cell Foundation of Georgia, an organization his wife heads up as executive director.

He shares his philosophy on service to others with those he coaches on the field.

“I encourage my players to be the best student athletes they can be and to set aside time for volunteerism,” Brannan said. “I let them know you have to have a love and compassion for your neighbor and I believe my blessings are a result of the work I try to do for other people.”

“Solomon is a devout Catholic who’s always taken religion and family seriously,” Baranco said. “He’s an excellent husband and father to his two sons and daughter. He’s an excellent role model to all families.”

Brannan said he wants to be a firm coach, but a coach who is fair because players respect a coach who exhibits fairness.

The most telling message Brannan will attempt to convey to his team “is to put God first in their lives and to thank God for the privilege of playing football at Morris Brown College.”

Once a “student of the game,” Brannan is now a coach and mentor to many. His coaching philosophy for the gridiron, winning or losing, and the game of life, in good and in bad times, is the same—there is no victory without God!

Over 23 yeas as scout or coach at both the professional and college level. He has served as area talent scout and player/coach in the NFL and the WFL. And as assistant football coach and head track coach at Morris Brown College and Morehouse College. For the past 27 years, he has also owned and operated Brannan Sports Enterprises.

Brannan and his wife Dolores Jean have been happily married for 40 years, and are the proud parents of two sons, and a daughter; Kevin, Kenny, Kim, and one grandson Brandon Theodore Sykes ,one son-in-law Ted Sykes. Coach Brannan likes to play golf and tennis in his spare time.