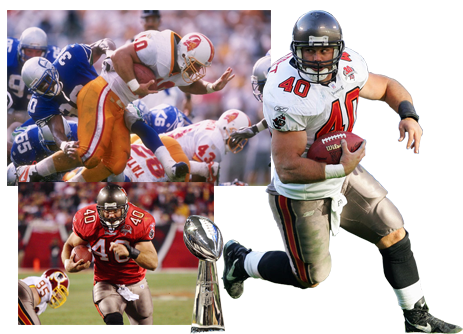 Mike Alstott, nicknamed "A-Train", is a former American football fullback in the National Football League (NFL). He spent his entire 12-year career with our Tampa Bay Buccaneers. He played college football at Purdue. During his career, Alstott was selected to six Pro Bowls and won Super Bowl XXXVII with the Buccaneers.

Alstott attended Purdue University for four years, where he became the first player in school history named MVP in three consecutive seasons. Alstott scored 12 touchdowns as a sophomore, 14 as a junior and 11 as a senior, and held the Purdue rushing touchdown record with 39 until Kory Sheets broke it in 2008. He averaged 5.6 yards per attempt during his Purdue career before graduating in 1995 with a bachelor's degree in business. He finished as Purdue's all-time leading rusher with 3,635 yards, including a school-best 1,436 yards in 1995

Alstott was selected in the second round (35th overall) by the Tampa Bay Buccaneers. The Buccaneers utilized Alstott primarily as a running fullback as opposed to a blocking fullback that teams were starting to switch to at the time. He was a member of the Tampa Bay Buccaneers team that won Super Bowl XXXVII (2002), played at Qualcomm Stadium in San Diego, California. Alstott rushed for 15 yards and the first Super Bowl touchdown in Tampa Bay Buccaneers history. He also caught five passes for 43 yards. Alstott signed a one-year contract to stay in Tampa Bay for the 2005 season, and signed a similar contract at the conclusion of the 2006 season after contemplating retirement. However, he spent all of the 2007 season on injured reserve because of neck problems, leading to his retirement on January 24, 2008. In the summer of 2007, shortly before he suffered his season-ending and ultimately career-ending neck injury, Alstott appeared in a television commercial for ESPN Fantasy Football along with former teammate Warrick Dunn, who was later signed by the Falcons. He was ranked #10 on the NFL Network's "Top Ten Power Backs".

Alstott is married to Nicole Alstott. They have three children; daughters Hannah and Lexie and son Griffin. Their family currently resides in St. Petersburg, Florida. Along with his wife Nicole they formed the Mike Alstott Family Foundation. Alstott also owns Island Way Grill, a restaurant in Clearwater, Florida along with former teammate tight end Dave Moore. Alstott also hosts an annual football camp. He was given the key to St. Petersburg on February 13, 2003. He makes an annual visit to St. Petersburg All Children's Hospital. Alstott also coaches youth football for the Seminole Chiefs and is head coach for the Northside Christian Mustangs in St. Petersburg, Florida.

SPOTLIGHT: In the words of Scott Smith - Senior Writer/Editor @ScottSBucs

Mike Alstott was a very, very good football player, but there was one part of the game he was better at than anything else.

On Sunday, at halftime of the Tampa Bay Buccaneers game against the Carolina Panther, Alstott will be formally inducted into the team's Ring of Honor at Raymond James Stadium. His name and iconic #40 will be unveiled on the stadium façade and a ceremony will take place on the field on which he entertained his fans for a decade. That ceremony will be arranged around the midfield stripe, but would it surprise anybody if Alstott somehow ended up 50 yards away, once again at home in the end zone?

For Alstott, scoring touchdowns – or winning games with two-point conversions or getting that one extra yard needed on third down or doing whatever his team needed of him – was a matter not only talent but of will. He was famous – he remains famous among legions of adoring fans – because many of his most greatest on-field moments were ones where he simply would not be denied. His second effort usually had a second effort.

During the Buccaneers' 2002 Super Bowl season (one of six playoff teams for which Alstott played), the Cleveland Browns came to town and got a full dose of the A-Train. Alstott carried 17 times for 126 yards, including a 25-yard jaunt and two touchdown runs. It was a 19-yard run midway through the fourth quarter, however, that became forever burned into the mental highlight reels of Buccaneer fans. Alstott ran over and through nine different Cleveland defenders on the play, bouncing from one to the next but refusing to go down. When the run was replayed on the stadium videoboards, fans gleefully counted off the Brown defenders in unison.

That is the player the Buccaneers and a packed Raymond James Stadium crowd will be celebrating on Sunday. They'll also be cheering for a local favorite, an Illinois kid who made his home and raised his family in the Bay area, a man who started the Mike Alstott Foundation along with his wife Nicole in order to help countless others in his adopted hometown. Alstott's legacy is felt not only within the Bay area community but within the Buccaneers' locker room.

"Mike has been a household name in this community for a long time," said wide receiver Vincent Jackson, a dedicated servant to the area's populace in his own right. He’s a great leader, mentor for other players that have come up through this organization and just a great man in this community. I’m so glad he stuck around here and continued to do great things for this organization and for this town and I couldn’t be happier for him."

Those fans on Sunday will be honoring the seventh member of the Ring of Honor, as Alstott's name goes up beside those of Lee Roy Selmon, John McKay, Jimmie Giles, Paul Gruber, Warren Sapp and Derrick Brooks. (Later this season, former QB Doug Williams will become the eighth member of the Ring of Honor). Alstott invaded the end zone like no other player in franchise history. He took up permanent residence in the hearts of Buccaneer fans everywhere. Now his name will be on display at Raymond James Stadium for generations of fans to come.

----- For the record, Alstott finished with 71 of those touchdowns, 25 more than James Wilder, the second player on the list. He got those 71 scores in 58 different games, and the Bucs' record in those 58 games was a sparkling 44-14. It was even better during his prime years as a contributor in Tampa Bay's backfield; from 1996-2002 he averaged 167 carries per year and the Bucs were 38-8 when he found pay dirt.

Other than Wilder, no other Buccaneer has even half as many touchdowns on his record as Alstott. He nearly scored more than all the kickers in team history. His 432 points were obviously a high among non-kickers in team history, but only two kickers even bested him (Martin Gramatica, 591, and Michael Husted, 502).

A late-season surge in 2006 allowed Alstott to crack 5,000 rushing yards before his career came to an end due to a second neck injury the following summer. He finished with 5,088 yards, trailing only Wilder’s 5,957, and his per-carry average was better than Ricky Bell’s and only 0.04 yards less than Wilder’s. Alstott also invaded the top three on the Bucs’ all-time receptions list, with 305. Only Wilder (430) and Mark Carrier (321) had more.

"He was a three-tier fullback," said Trent Dilfer, Alstott's former teammate from 1996-99, upon Alstott's official retirement in 2008. "Mike was obviously a great ballcarrier. He could have played solely tailback, and did play tailback for many games. He was a very good fullback from a lead-blocking standpoint. Then he was one of the best natural receiving backs in all of football. We weren’t a very talented football team in those days, but if it wasn’t for him and his versatility – he really started and ended what we were offensively. He was just one of the great football players that I’ve been fortunate to play with throughout my career."

Alstott was a critical part of the Buccaneers' 2002 Super Bowl XXXVII championship run. He scored four touchdowns in the '02 playoffs, including the first one in the 48-21 Super Bowl victory over Oakland. He is the team's all-time playoff leader in both rushing yards and touchdowns and has appeared in more postseason games (10) than any other Buccaneer besides Derrick Brooks (11), Ronde Barber (10) and Shelton Quarles (10).

Alstott’s six Pro Bowl trips also make him the most decorated all-star among offensive players in team history, putting him two ahead of tight end Jimmie Giles and three ahead of center Tony Mayberry. Among all players, Alstott’s total of six Pro Bowl selections ties Lee Roy Selmon and trails only Brooks (10) and Warren Sapp (seven). Alstott was also an AP first-team all-pro three times – a more exclusive honor even than the Pro Bowl – and a second-team choice as a rookie.

His amazing pinball run against the Browns is the choice among many fans as his top highlight, but not all of them. Some favore the touchdown he scored in Minnesota in 1997 when he landed on his feet after an unsuccessful dive over the pile, then bounced to the outside, got turned around and bulled backwards through three Viking tacklers. There was the game-clinching 31-yard touchdown run in the Bucs’ first playoff win in 18 years against Detroit in 1997. There was the two-point conversion to beat Washington, 36-35, in 2005.

We could go on, obviously. Alstott was blessed with such incredible balance that he routinely kept plays alive long after it appeared as if he was headed down. It was the surprisingly nimble feet that paired with Alstott's 240 pounds to make him a unique weapon in the NFL. Second and third-effort runs like the ones mentioned above – and there were enough of them over the years to fill a lengthy highlight reel – spoke to his will and determination, but still wouldn't have been possible without his innate physical gifts.

"I remember that none of the defensive guys would ever want to sit down on the bench when our offense had the ball because we would want to see how many guys he would run over," said John Lynch, a teammate of Alstott's from 1996-2003.

And Alstott was also known as the consummate teammate, putting up the numbers described above while only occasionally being considered the team’s top backfield option. He shared carries with Warrick Dunn, Michael Pittman, Errict Rhett, et al. He shared blocking duties at times with H-backs like Patrick Hape or more traditional fullbacks like Lorenzo Neal. He often got the ball when virtually everyone on the other side knew it was coming to him, whether it be at the goal line or in the fourth quarter of a close game.

"Mike always put the team first and was a great, great teammate," said Lynch. "It was truly an honor to have played with him."

Mike Alstott played for only one NFL team, made the Bay area his home and converted legions of Floridians into A-Train fans, one rugged yard at a time. His place in Buccaneer history is permanent, and that's exactly why his name and number are now on the Raymond James Stadium façade.

Few players appear more prominently in the Bucs' record book than Alstott, who finished his career and still remains in the top three in team history in scoring, rushing and receptions. Those are just a few of the eye-opening numbers Alstott produced during his 11 seasons of play. Here's a rundown, from 1 to 7,372.